The Origin of Hatha Yoga is traced to the teachings Parvati received from the deity Shiva. When Shiva teaches Yoga he is called Adinath or Shrinath. (primordial or honoured Lord)

Adinath is the role model of all Yogis, to obtain a mastery of Yoga just like his and to become aware of the identity of the Yogi to Adinath is the original aim of the path of Yoga.

The first human Guru in the List of teachers of Yoga was Matsyendranath, he learned Hatha Yoga and other tantric teachings directly  from the mouth of Adinath-Shiva.

According to the important  Hatha Yoga scripture, "Hatha Yoga Pradipika" (Lamp of Hatha Yoga), the tradition was handed down to the author, Yogi Svatmarama, by the following lineage of perfected Yogis (Siddhas): 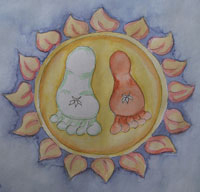 Among all the Yogis and Teacher of the Siddha lineage 84 have been most prominent, among those again certain Mahasiddhas (great or unsurpassed perfected Yogis) are especially venerated.

Besides Hatha Yoga the Siddhas gave rise to many other indian spiritual traditions and teachings, among them  tantric paths like Vajrayana or the Kaula Lineages as well as the Rasayana with a focus on medicinal preparations.

Important Siddhas are for instance the four primal gurus of the four mythical ages Khagendranatha, Kurmanatha, Mesanatha and Matsyendranatha, but there are also groups of 18 or 9 Siddhas.
Navanaths
These nine Siddhas are also called  nine powerful Lords (Navanaths). Of the Navanaths it is said that they have mastered the body, and the cycle of rebirth, and have conquered death by the application of Hatha Yoga and Tantra.  That is the reason why they are still  able to guide and help sincere Yoga practicioners  today and help them to become perfected Yogis. (Siddhas)

There is no agreement on the exact names of these navanaths and different lists are mentioned in the scriptures  The disciples of the Siddha Gorakhnath for instance popularised the following list: 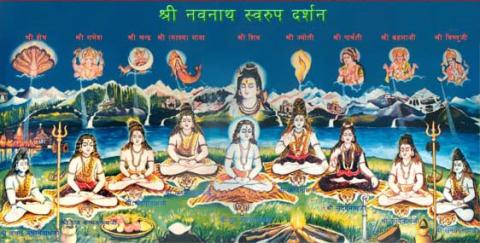 The complete universe is containend in the symbolism of the nine masters, the four ages, the five elements, humans, animals, deities, the points of the compass and its centre and the nine openings or gates of the body.

The meaning of the word hatha
The sanskrit word hatha means powerful exertion. Powerful exertion is necessary to become free of impurities (Kleshas Malas). Yoga aims to reach an equilibrated state beyond the reach of extremes (sama) that is ultimately free of exertion and suffering.  This state of natural effortless equilibrum can shine forth after the impurities that occlude it have been cleansed by the Yoga of powerful exertion (Hatha Yoga).

The natural, effortless and spontaneous state of equilibrium is contained in the word hatha as well, since ha symbolises the sun and tha the moon, which represent the extremes of heat and cold, poison and elixier, inhalation and exhalation and similar dual principles.

Therefore the combination of the syllables ha and tha, the word "hatha" represents, first the awareness and then the equilibrium and finally the unification of polarities.

Utilising, harmonising and regulating opposing forces in the body and mind is an important teaching of Yoga. Sucess in such practices will also reflect outside and help in the effort to regulate conflicts and master opposing forces, not only in the body and mind but also in the environment.  By applying the six limbs of Yoga opposites will merge and the causes of suffering can dissolve. What now appears as different can acquire the same taste (samarasa). 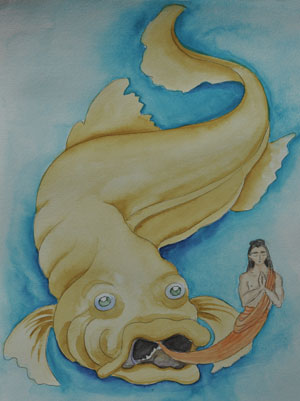