Dharana is the contemplation that whatever appears as the inner or outer world, is one with the primordial mind, one's own original form. That way all fluctuations of the mind fade into the formless. That way one's own self rests unmoving like a flame in the still air of a room.

Dharana, Concentration
Dharana in Sanskrit means: support, stability and rest. In the context of the Yoga teachings it refers to the stability of the mind at rest. It is the calm that is achieved by concentration on an object that is able to support the stabilising of the mind. In the preceding three limbs of yoga the Yogi was trainend to keep the body, breath and mind calm and stable. This empowers him to now let his mind rest on a concrete object of concentration intensely, with inner calm and without distraction.

1.) The first method of dharana combines the withdrawal of the senses from the sense objects (pratyahara) that is followed by an inward turned concentration on the primordial unchanging nature of the mind (atma), still untouched by differentiation into knower and known. It is an inborn state of every being, always resting in itself, primordial free from outer and inner changes.

2.) The second method of dharana consists of the abstract concentration on the principle of formless space, without any attributes and elaborations, the emptiness (akasha, shunya) as well as the contemplation on an all-encompassing and all- penetrating principle (brahman) that permeates the outside as well as the inside of the body. 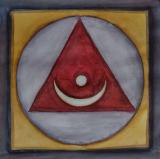 3.) The third method of dharana consists of using an arrangement of real and imagined, concrete objects of meditation. The objects used are the geometric symbols, colours and sounds of the five elements (panchamahabhutas), which are aggregation states, their five related mantric seed sounds (bijas), the five corresponding life energies or winds (prana, vayu), five senses (indriyas) and  five organs of activity, (karmendriyas) as well as deities (devas) and diverse other principles (tattvas).

The aim of these exercises is to become aware of the interweaving and mutual influence of all principles, reflection is done on the unity and indivisibility of the inner and outer world. That way these principles can be masterd and controlled by prolonged practise.

The five elements and aggregation states (bhuta, tattva) of the Yoga philosophy

The practical exercises that consist of concentrations on these principles start off easier in the stage of dharana and are deepened, broadened and prolonged in the next limb of Shadanga yoga called Immersion (dhyana).