Skip to main content
Asti kascana paramAdvaitasya bhAvah sa evAtmeti yathA yadyat sphurati tat tat svarUpam eveti bhAvayet sarva bhUteshu sam drishtis ca.
This (dhyana) is the state of highest non-dualism, whatever flashes through the mind is an expression of the primordial self-nature and all things appear to be equal.
2.38 Siddha siddhAnta paddhatiH
of GorakshanAtha
Dhyana, Immersion
In the fifth limb of Shadanga Yoga, called immersion (dhyana), the time of the meditations are prolonged, their intensity heightened.

In the practice of dharana, the preceding limb of yoga, the Yogi was taught to reflect with an undisturbed mind on:

1. the primordial nature of his own self
2. the principle of space (akasha, shunya) without form and attributes and its all pervading presence.
3. concrete objects, either actual or imagined.

During dhyana these practices are combined and their scope is broadend.

There are  two methods of immersion 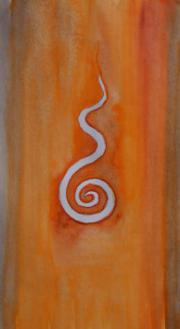 1. Dhyana without elaborations
In this method the mind is guided to contemplate a realm beyond attributes, not touched by anything. It is stainless (niranjana)  uncaused and independent (nirAlamba). During this Immersion the all penetrating nature of the mind beyond form, without boundaries is experienced. The object of Immersion is conceived to be similar to space (kha, akasha) and the void (shunya).

2. Dhyana with elaborations
Attention is directed to a concrete Form. The Yogi starts the practice of dhyana with a refined and broadened concentration on the principles and elements that was already taught in the preceding limb. Additionally a wide variety of advanced contemplations are practised. Immersion in spontaneous arising sounds, lights and colours as well as geometric forms are practised. The guiding of the attention to the 16 vital points in the body (adharas), that was introduced in the preceding stage, is supplemented by penetrating the vital points called wheels (chakras) and the channels of lifeforce called nadis. Personifications like depictions of Deities, Yogis and Siddhas along with their emblems also serve as objects of contemplation, during the practice of immersion.

Raja Yoga
The most advanced methods of Yoga are part of the limb of dhyana, they are a synergy of what has been taught in the preceding stages. What has been learned is ultimately combined into one effort that  leads to a process of dissolution (laya, samhara) and renewal. This is achieved by stimulating and guiding the lifeforce (pranashakti) into different body regions, penetrating the vital points of the body and the network of channels. This causes the natural arising of the state of union (samadhi). The advanced applications of the fifth limb of Yoga, that lead the Yogi to the summit of Hatha Yoga, the union (samadhi) are called Raja Yoga, the majestic Yoga.